Non-accidental injuries in the pediatric population can be easily missed unless health care professionals are attuned to subtle clues in both the history and physical exam.  Physical abuse can occur in any socioeconomic level, however, there are increased rates of abuse with children living in poverty; those who have special needs (e.g. developmental delay, cerebral palsy, prematurity); and those with caregivers who are substance abusers, single parents, under extreme stress, and former victims of abuse.  Non-accidental injuries should be suspected when an injury is unexplained, the severity of the injury is incompatible with the history, the history keeps changing, or the injury is inconsistent with the developmental age of the child.  Any delay is seeking medical care following an injury is also suspicious for abuse.  Suspected abuse needs to be thoroughly investigated with the assistance of child protection services.

The most common manifestation of abuse is bruising.  Bruises from impact trauma are common on leading surfaces overlying bone edges (e.g. shins, forearms, brow and chin).  Unusual sites for bruising which are suspicious for non-accidental trauma include: the buttocks, trunk, genitals, ears, and back of hands.  Additionally, bruising which is bilateral, symmetric or geometric especially in a non-ambulating child raises concerns.  The bruise can reflect the instrument used to inflict trauma and thus each needs to be assessed for shape, depth and pattern (Figure 1).  Although attempts to date a bruise are inexact, finding multiple bruises of various colours on the same area may suggest they are not from a single, isolated incident. 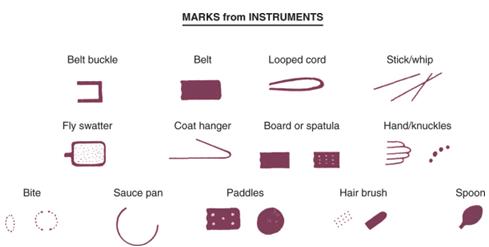 An estimated 15-25 % of pediatric burns are the result of abuse.  Like bruising, the burn injury pattern and location can be a red flag for abuse.  Children tend to explore objects with the palmer surface of their hand and will not touch a heated object very long.  The burn shape can reflect an object used in the injury, such as a burn from a cigarette, iron, curling iron or light bulb (see Figure 2).  Additionally, immersion scalds of the hands, feet, or buttocks can occur if a child is placed in hot water intentionally or unintentionally.

Fractures are the second most common manifestation of child abuse after soft tissue injuries.  85% of fractures from non-accidental injury occur in children under the age of 3 and 69% occur in infants under the age of 1.  Although there are fracture patterns suggestive of abuse, there are no patterns that are pathognomonic for non-accidental injury.  Any fracture in a young child should be concerning, especially if the child is not ambulating.  If an infant is pulled or wrenched, the corner of the metaphysis can be torn, commonly referred to as a “bucket handle” fracture.  Finding spiral fractures in the bone shaft is indicative of a twisting injury rather than a transverse fracture from direct impact.  Femur fractures prior to the age of walking are especially concerning, as are bilateral long-bone fractures. Violent squeezing of an infant’s chest results in anterior and/or posterior rib fractures which are difficult to acquire with other injuries as children’s ribs are flexible.  Additionally, fractures of the sternum, scapula, or spinous processes are unusual in the pediatric population.  Skull fractures result from a direct force on the calvarium and are very uncommon in children less than 18 months.  In non-accidental trauma, they most commonly occur as linear fractures in the parietal bone and can often be complex in nature.  A significant red flag for non-accidental injury is finding multiple fractures at various stages of healing in a child (1).

Abusive head trauma, also known as shaken baby syndrome, is the most common cause of child abuse death, usually occurring during the first year of life. Shaking or blunt head trauma can result in cranial injuries such as unilateral or bilateral subdural hemorrhage, diffuse retinal hemorrhage, and diffuse brain injury.  Retinal hemorrhages, often multilayered, occur in 60-85 % of non-accidental head injuries and are uncommon in accidental head trauma.  The diagnosis of abusive head trauma is often missed since often no history of head trauma is provided and the signs and symptoms may be non-specific, such as vomiting, poor feeding, irritability or lethargy.  Some caregivers may only present for medical care if more severe symptoms arise such as seizure, apnea or coma.  The majority of children have an abnormal neurological exam but many will have no external signs of injury.

To begin the history, open ended questions should used to determine how the injury occurred.  These questions should be directed first to the child, if they are able to answer, and then to the parent.  During this portion of the interview it is very important to assess the parent-child interaction.  If there is a suspicion of non-accidental injury, it is important to then interview the child alone and if the caregiver will not permit this it is considered a red flag for abuse.  Concerning information during history taking is if the injury is not well explained, the severity does not match with the history, or the injury is inconsistent with the developmental age (e.g. a 1 month old baby rolled off the couch).  If there are inconsistencies with the history or any delays in seeking medical care, these are also of concern.

A general and focused physical exam needs to be completed.  Findings that raise suspicion are injuries inconsistent with the history, multiple injuries in various stages of healing, or any injuries pathognomonic for abuse, such as cigarette burns.  Evidence of poor caretaking, sudden onset of mental status changes, any bruises on an infant that is not cruising yet, bruises to the pinna, neck or abdomen and any injury to the genitalia. It is important to keep in mind that some findings may be concerning initially but are actually not signs of intentional injury.  Intense crying, coughing or retching may cause petechiae on the face and shoulders, Mongolian spots may appear as bruising in the lumbosacral area, coagulopathies may result in usual bruising, and pathologic bone disease (e.g. chronic renal disease, osteogenesis imperfecta, and rickets) may present with suspicious fractures .

Laboratory investigations need to be tailored to the nature of the injury and findings on physical exam.  In all cases of bruising, screening tests for a bleeding diathesis should be performed with CBC, INR, and PTT.  A more extensive evaluation for a bleeding disorder may include fibrinogen, von Willebrand’s testing, factor deficiencies and homocysteine levels.

Both a skeletal survey, which consists of a series of radiographs of the skull, thorax, long bones, hands, feet, pelvis, and spine, and a radionucleotide bone scan are tools to reveal sites of past injury. Indications for a skeletal survey are any child less than 2 years of age with any evidence of abuse, any child less than 5 years of age with a suspicious fracture, or any older child who is unable to communicate areas of pain or trauma (e.g. intellectually disabled).  In the event that a skeletal survey is negative but the suspicion remains high, a radionucleotide bone scan can be performed.  A skeletal survey may also be repeat 7 – 10 days following the injury to reveal healing fractures that may have been missed.  This is a significant amount of radiation for a child to be exposed to and thus the decision to complete a skeletal survey needs to be made carefully.

If a head injury is suspected a head CT and ophthalmologic exam are important.  If there are any concerns about abdominal trauma, liver and pancreatic enzymes should be ordered along with an abdominal CT and both urine and stool needs to be screened for blood.

Non-accidental injuries are common in the pediatric population. It is always important to keep an open mind and never make assumptions; yet always pay attention to subtle clues that may be present in the history and physical examination. If there is any suspicion of non-accidental injury, contact your local Child Protection Services team who will guide you through the next appropriate steps. Finally, always remember to document thoroughly and accurately.