Cervical palpation very often identifies one or more neck mass in the pediatric patient.  The differential diagnosis is extensive, but diagnosis is made often with history and physical alone.

An understanding of surface anatomy, lymphatic drainage patterns in the neck, and head and neck embryology are extremely useful in diagnosis.  Typically three primary categories of neck masses are described:

Other causes include traumatic, metabolic, autoimmune, and idiopathic conditions, not discussed here.

Most pediatric masses are the result of a self-limited bacterial or viral infection. It is important to be able to distinguish inflammatory masses or normal neck structures from masses that require intervention or referral.

Patient age and duration of symptoms are the most important points in historical evaluation.

An accurate description of the location and palpable characteristics of the mass or masses is the most important aspect of the physical exam. A full Head and Neck examination should also be done to identify any primary sites of malignancy or infection, including tympanic membranes, nasal mucosa, and oropharynx.

Mass characteristics indicate much about the underlying pathology (Adapted from (2))

Many neck masses tend to occur in consistent locations:

Malignant masses are uncommon in children, but when do occur are most often lymphomas or soft-tissue sarcomas.  Rhabdomyosarcoma is the most common soft tissue malignancy.  In contrast, in adults over 40 years of age, a malignant neoplasm causes 80% of solitary neck masses.(2) 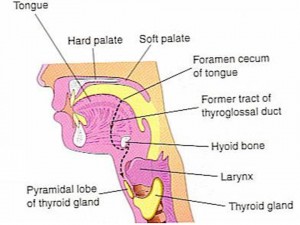 Fig. 2: Path of descent and sites of ectopic thyroid remnants during embryonic development. (From (4))

Most often, pediatric neck masses are inflammatory cervical lymphadenitis that can be observed for 2 weeks with or without antibiotic therapy dependent on suspected etiology.  However, there should be a strong index of suspicion for potentially malignant masses and immediate referral should be made to a head and neck surgeon for further evaluation.