Definition:  Constipation is defined as a delay or difficulty in evacuating stool. The North American Society for Pediatric Gastroenterology, Hepatology, and Nutrition define constipation as “a delay or difficulty in passage of bowel movements present for two or more weeks, which causes the patient significant distress”. The definition of constipation becomes confusing at times because parents may have very different interpretations of constipation.  In addition, the frequency and types of stools change with growth and development and thus the definition must be adjusted accordingly:

Constipation is common in children. Children have an increased tendency to constipation during 3 stages of their lives:

These stages represent defecation challenges to the child and the possibility of an unpleasant and frightening experience, which in turn may lead to the conscious or unconscious avoidance of defecating. This is described as functional constipation and becomes a cycle.  If defecation is associated with pain, the child avoids having a bowel movement and the stool accumulates in the rectum and becomes even harder.  Now the process of defecation becomes even more painful and the child avoids having a bowel movement even more that he/she did before. This cycle is known as the pain retention cycle and will not end until the bowel movements are no longer painful. 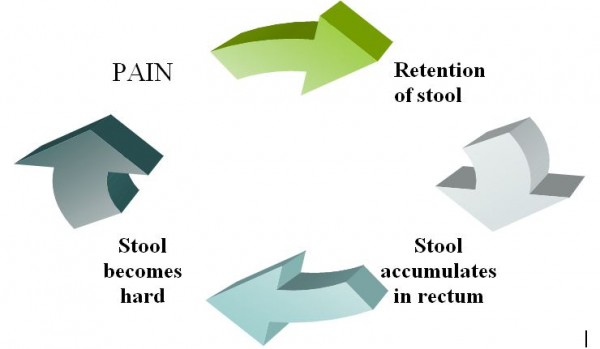 Parents often come to the physician with the concern that their child is constipated because they are straining and their face is turning red when they have a bowel movement. It is important to note that apparent straining does not necessarily indicate constipation; infants are at mechanical disadvantage as they are supine while defecating and have weak abdominal muscles.

The first bowel movement in a full term infant should occur in the first 36 hours of life.  Remember to ask about neonatal constipation.

It is a good idea to ask parents to bring in a dietary and symptom diary of the past week.  Ensure parents are recording stool frequency, appearance, consistency, and any associated pain.  Functional constipation is typically diagnosed based on history although they often have stool retention on physical exam.  Features that raise suspicion of an organic cause of constipation include the following: Delayed growth, failure to thrive, urinary incontinence/bladder disease, constipation from birth or onset before 1 year of age, delayed passage of meconium, acute constipation, fever, vomiting, diarrhea, passage of blood, absence of withholding or soiling, extraintestinal symptoms and/or failure to respond to conventional treatments. Any of these features requires a more thorough work-up to rule out organic causes.  A family history of chronic constipation is also important to elicit.

Finally a dietary history is critical in determining the underlying cause of a child’s constipation. Children consuming a diet high in processed foods and lack of fiber are more likely to experience constipation.

Constipation is a very common problem among children.  The majority of constipation is functional and revolves around changes occurring in the child’s life such as the transition to solid food, toilet training and starting school. Parents should be educated about functional constipation and supported to help the child break the retention cycle. It is extremely important however, to recognize organic causes of constipation and perform diagnostic tests so that appropriate therapy can be initiated.

A child who presents with painful defecation should have a course of stool softener to alleviate the fear of passing a bowel movement.  This may be the only method to break the pain-retention cycle. The stool softener should be non-habit forming and palatable.  Safe and effective choices include electrolyte free polyethylene glycol, mineral oil and milk of magnesia. Also, encourage the child to site on the toilet in the morning upon waking and after meals as the colon is maximally active during these times.

Finally, children who are unable to pass stool for several days may be treated with a sodium phosphate enema followed by a laxative.