It is not uncommon for children to bleed and bruise after experiencing trauma.  However, a child may also have an underlying coagulopathy, which results in easy and possibly life-threatening bleeding.  It is key to distinguish between ‘normal’ and pathological bleeding.

When dealing with clinically significant bleeding, it is important to have an approach to help focus your investigations (Figure 1).  Bleeding may be the result of abnormalities in: 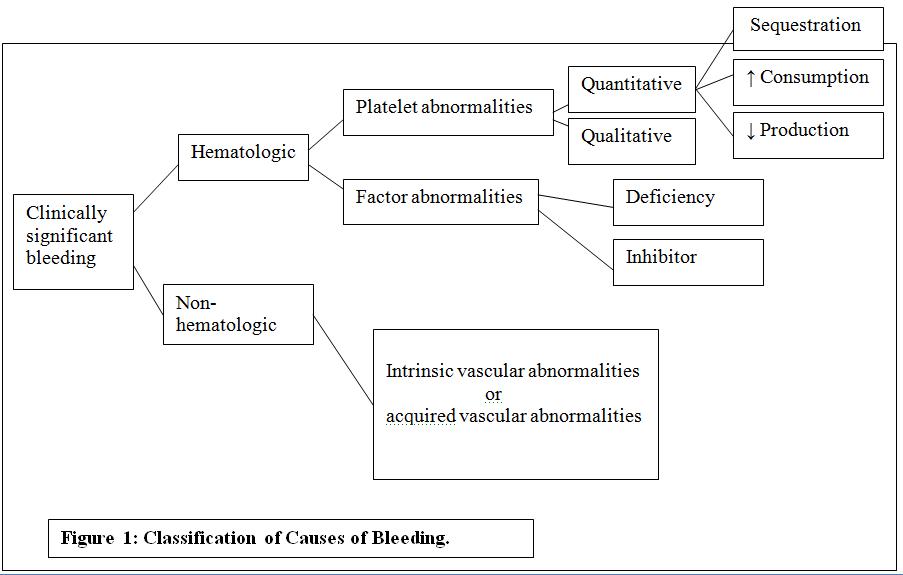 Platelets are responsible for forming a plug that fills small defects in blood vessel walls that result from endothelial injury.  This process begins immediately following injury.  When platelets are either insufficient or dysfunctional, bleeding results. The bleeding that is associated with limited number or dysfunction of platelets involves the skin (i.e. petechiae, purpura, bruises, prolonged bleeding from superficial cuts) and mucus membranes (i.e. epistaxis, gingival bleeding, menorrhagia).

Coagulation factors are responsible for making a fibrin net to stabilize the platelet plug, and occlude larger vessel defects.  This process occurs within minutes.  When the coagulation factors are not being produced, or an inhibitor prevents their action, patients present with delayed bleeding in the form of large ecchymoses, hematomas, and hemarthroses.

Note that most coagulation factors are found as early as the 10th week of gestation in utero; however, their levels and activity only reach adult levels when children are 1 year old. Indeed, vitamin-K associated factors (II, VII, IX, X, protein C, protein S) are present in ½ normal adult values at birth, while fibrinogen, von Willebrand Factor, and factors V, VIII, XIII are often greater than adult values.

Vessels act as conduits for blood to move throughout the body. When their integrity is disrupted, one sees in non-hematological bleeding abnormalities, such as purpura, and bleeding within tissue parenchyma (lungs, nasal cavity, kidneys).

A coagulopathy may be congenital or acquired, and a detailed clinical history will help guide the diagnostic process.  It is thus crucial to inquire about the child’s history of bleeding and bruising, dating back to birth.  A child with a congenital bleeding disorder will have a history of easy bleeding.  A thorough history should include:

As with most presenting complaints in medicine, the second step in evaluating a clinical concern is a thorough physical examination. Key elements in the assessment of easy bleeding include:

Once a thorough history and physical have been performed, investigations may be ordered in accordance with the clinician’s suspicions. All patients suspected of having a bleeding disorder should have a complete blood count, smear, as well as basic coagulation screen, including prothrombin time (PT) and its standardized measurement, the international normalized ratio (INR), as well as an activated Partial Thromboplastin Time (aPTT). 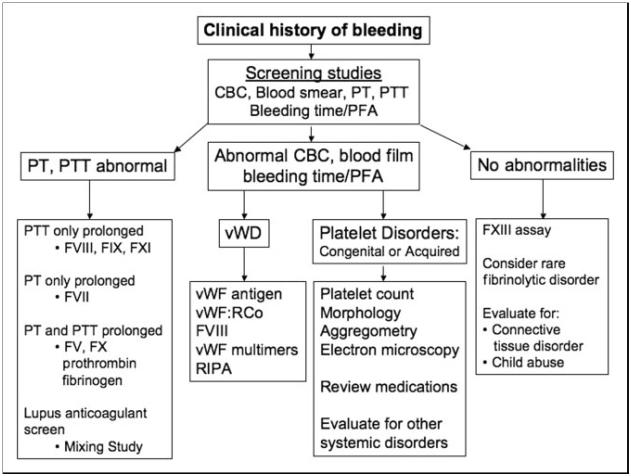 The most common causes of bleeding disorders are acquired, due to hepatic dysfunction, vitamin K deficiency, disseminated intravascular coagulopathy, and, in children, immune/idiopathic thrombocytopenia purpura. The most common inherited disorder of easy bleeding is von Willebrand’s Disease. Note that the differential diagnosis for easy bleeding can be subdivided based on one’s approach to coagulopathy:

Prompt and correct diagnosis of bleeding disorders is essential to initiate treatment, begin the referral process as indicated, and ultimately, to minimize patient morbidity and mortality. As is often the case in pediatric practice, teaching is required for the entire family regarding the condition and its possible treatments. Whenever possible, treatment should be aimed at correcting the underlying cause.