Diaper rash, or diaper dermatitis, is a general term describing any of a number of inflammatory skin conditions that can occur in the diaper area.

INCIDENCE OF THE CONDITION:

Diaper rash is the most common dermatitis found in infancy.  Prevalence has been variably reported from 4-35% in the first 2 years of life; incidence triples in babies with diarrhea. It is not unusual for infants to have at least 1 episode of diaper rash by the time he or she is toilet-trained.

Because fewer than 10% of all diaper rashes are reported by the family, the actual incidence of this condition is likely underestimated if office visits are used as the screening site. The incidence is lower among breastfed infants—perhaps due to the less acidic nature of their urine and stool. Babies wearing superabsorbent disposable diapers with a central gelling material have fewer episodes of diaper dermatitis compared with their counterparts wearing cloth diapers. However, keep in mind that superabsorbent diapers contain dyes that were suspected to cause allergic contact dermatitis (ACD).

Diaper rash likely results from a combination of factors that begin with prolonged exposure to moisture and the contents of the diaper (i.e., urine and feces).  The main irritants in this situation are fecal proteases and lipases, whose activity is increased greatly by elevated pH. An acidic skin (neutral or low pH) surface is essential for the maintenance of the normal microflora, which provides innate antimicrobial protection against invasion by pathogenic bacteria and yeasts. Fecal lipase and protease activity is also greatly increased by acceleration of gastrointestinal transit; this is the reason for the high incidence of irritant diaper dermatitis observed in babies who have had diarrhea in the previous 48 hours. The wearing of diapers causes a significant increase in skin wetness and increase in the pH level. Prolonged wetness leads to maceration (softening) of the stratum corneum, the outer, protective layer of the skin, which is associated with extensive disruption of intercellular lipid lamellae. Weakening of its physical integrity makes the stratum corneum more susceptible to damage by (1) friction from the surface of the diaper, and (2) local irritants. The normal pH of the skin is between 4.5 and 5.5. When urea from the urine and stool mix, urease breaks down the urine, decreasing the hydrogen ion concentration (increasing pH). Elevated pH levels increase the hydration of the skin and make the skin more permeable. At full term, the skin of infants is an effective barrier to disease and is equal to adult skin with regard to permeability. However, dampness, lack of air exposure, acidic or irritant exposures, and increases in skin friction begin to break down the skin barrier.

Previously, ammonia was believed to be the primary cause of diaper dermatitis. Recent studies have disproved this, showing that when ammonia or urine is placed on the skin for 24-48 hours, no apparent skin damage occurs.

In order to understand the clinical approach to history taking and examination of the infant who is suffering from a problematic diaper rash, a differential diagnosis must be held in mind when approaching the problem.  The questions asked concerning the condition and the focus of the examination and investigation then makes more sense.

Miliaria: Occurs when the sweat gland ducts get plugged due to dead skin cells or bacteria such as Staphylococcus epidermidis, a common bacterium that occurs on the skin, which is also associated with acne.  The trapped sweat leads to irritation (prickling), itching and to a rash of very small blisters, usually in a localized area of the skin (heat or sweat rash). 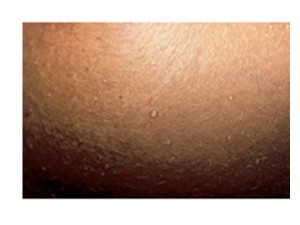 Intertrigo: Occurs when moist skin, usually lying within skin creases and folds, becomes more fragile, is hot and a good culture area for bacteria. It has a higher coefficient of friction, becomes damaged from maceration and chafing, eventually resulting in a skin-infected area. 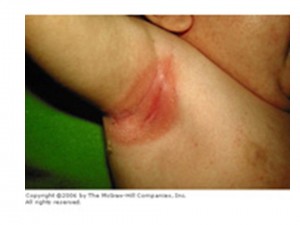 Contact dermatitis: Irritant contact dermatitis is most likely made up of some combination of intertrigo and miliaria. In addition, it has been shown to result from the irritating effects of mixing urine with feces. This alkaline urine causes activation of fecal lipases, ureases, and proteases. These, in turn, irritate the skin directly and increase its permeability to other irritants.

Candidal diaper dermatitis: Once the skin is compromised, secondary infection by the yeast organism, Candida albicans, is common. Between 40% and 75% of diaper rashes that last for more than 3 days are colonized with C. albicans. Candida has a fecal origin, and is not an organism normally found on perineal skin. Amoxicillin was found to increase the colonization by C. albicans and worsens the diaper dermatitis. 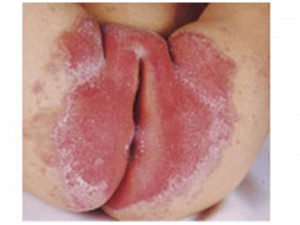 Bacterial diaper dermatitis: Bacteria may play a role in diaper dermatitis through reduction of fecal pH, resulting in the activation of enzymes. Additionally, fecal microorganisms probably contribute to secondary infections, when they occur. This is particularly evident with bullous impetigo in the diaper area, which causes bullae that are flaccid but sometimes tense due to Staphylococcus aureus infection, or a cellulitis due to cutaneous streptococci, or even a folliculitis due to S. aureus infection.

Polymicrobial growth is documented in at least half of diaper rash cultures.  Staphylococcus species are the most commonly grown organisms, followed by Streptococcus species and organisms from the family Enterobacteriaceae.  Nearly 50% of isolates are anaerobes.

CLINICAL EVALUATION OF DIAPER RASH – CORRELATION OF HISTORY AND EXAMINATION: