Background: Of more than 100,000 cases of foreign body ingestion reported each year in the United States, 80% occur in children, with the majority of the foreign body ingestion being accidental. Most often foreign body ingestion occurs in children between ages of six months and three years; reflecting the tendency of small children to use their mouths in exploration of their world. Coins are the most common foreign body ingested by children; others include toys, toy parts, magnets, batteries, safety pins, screws, marbles, bones and food boluses. In countries in Asia, where fish is a food staple, fish bones are most commonly ingested. Fortunately, mortality rates are low, and most foreign bodies pass harmlessly and are eliminated in the stool. Complications include systemic reactions due to allergies to ingested object, gastrointestinal mucosal erosion or perforation, peritonitis, pneumothorax, and production of an aortoenteric fistula.

Pathophysiology: The location of the foreign body ingested is important for determining the appropriate investigations, prognosis and treatment. This is usually categorized anatomically into esophagus and stomach/lower gastrointestinal tract.

Most complications from pediatric foreign body ingestion are due to esophageal impaction, usually at one of the 3 physiological narrowing areas:

1) about 70% at the upper esophageal sphincter or thoracic inlet,

2) about 15% in the mid-esophagus at the level of the aortic notch, and

3) about 15% just above lower esophageal sphincter.

Patients are at an increased risk if they are small, have an underlying esophageal disease such as a stricture, have undergone previous esophageal surgery, or have ingested several coins at one time.

Once the foreign body has reached the stomach in a child with a normal GI tract, it is less likely to lead to complications. However, exceptions include sharp or toxic bodies, objects too large to pass through the pyloric sphincter (greater than 2×6 cm), and more than one magnet which may attract and adhere tightly through the tract leading to obstruction, necrosis of intervening tissues or even the formation of a fistula.

Clinical Symptoms: Children can often be asymptomatic, have transient symptoms, or have vague symptoms which do not immediately suggest foreign body ingestion; therefore, it is important to always keep the possibility of a foreign body in mind.

b)    Lab studies: children with foreign body ingestion do not usually require lab testing, although they may be indicated if suspect potential infection

d)    Metal Detectors: sensitive and specific for identifying the location of ingested metallic objects such as aluminum

e)    Endoscopy: children who require extensive radiologic investigation may be referred for endoscopy as it is safe and highly effective

b)    Disk batteries: a medical emergency, as contact with esophageal wall with both poles of battery can conduct electricity which can rapidly lead to necrosis and perforation of esophagus. However, once passed to stomach, most pass harmlessly.

d)    Magnets: a single ingested magnet is usually low risk, however two or more magnets may attract across layers of bowel leading to necrosis, fistula, perforation or obstruction. Thus, location, and number of ingested magnets are important to determine and multiple magnets ingestion indicates preemptive removal. 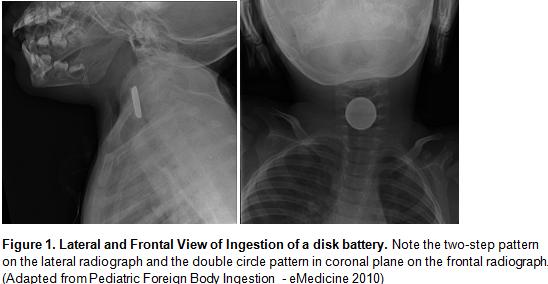 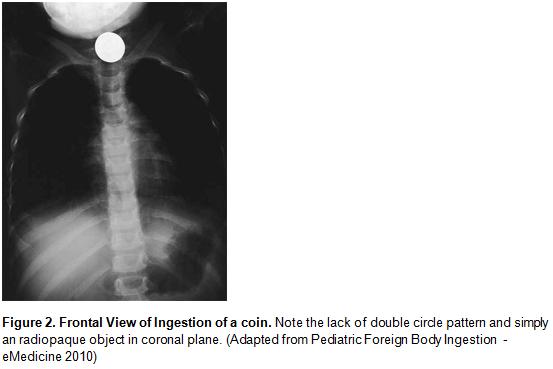 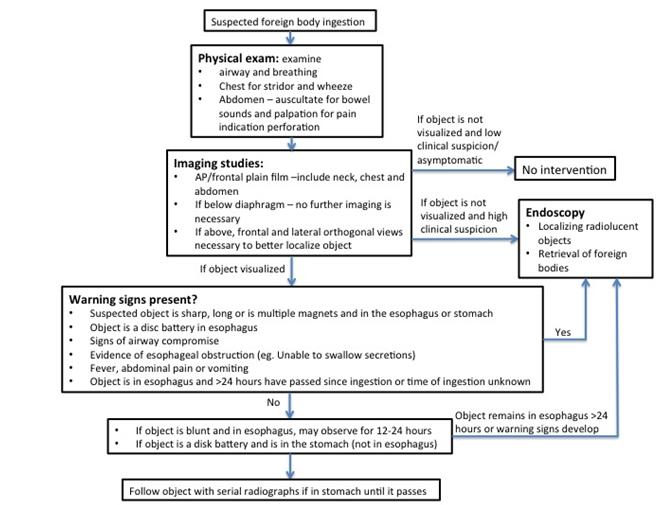